On January 23rd the United States recognized Juan Guaido as the legitimate President of Venezuela, a decision quickly followed by over eighty other countries. It immediately became apparent that Nicolas Maduro, the former president, would do anything to maintain his tyrannical control of the country.

We suggested that one way, short of war, that the free countries allied behind Juan Guaido could put additional pressure on Maduro to leave would be by positioning a group of warships from the neighboring countries and the US Navy off the coast of Venezuela. The mere presence of these ships should certainly increase anxiety amongst Maduro’s military and palace guard. Traditionally naval forces from friendly countries have worked closely together and often established strong personal relationships. Possibly some commanding officers from the Bolivarian Navy could be induced to deploy their ships and join the Allied task force.

Last weekend the Maduro government blocked the humanitarian relief efforts that produced massive rallies of Guaido supporters. Although the number of defections has increased, Maduro still retains control of most of the military, Russian mercenaries’ and civilian beneficiaries of his kleptocracy. Juan Guaido has stated that military intervention might be required to overthrow the Maduro regime.

In October, 1917 (202 years ago!) the Russian Cruiser Aurora allegedly fired the first shot to signal the start of the Russian Revolution. It would be both ironic and fitting if a vessel of the Bolivarian Navy replicated that action at an appropriate time. In recognition of Vladimir Putin’s support of the Maduro regime, perhaps the ship could be renamed Aurora II. 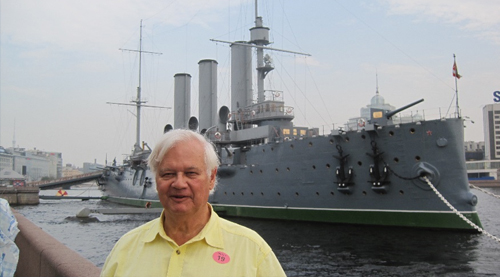 The Aurora and the Author