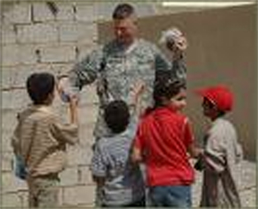 Although many reasons have been given for the invasion of Iraq, the ultimate objective of the Coalition has always been to leave a stable, prosperous, pro-Western country, under a constitutionally elected, secular government. If these results indeed could be achieved, it would accomplish a number of important goals of US (and Israeli) foreign policy, namely to: (a) Establish a beachhead of a democratic and secular government in a region of Arab monarchies and the Iranian theocracy; (b) remove the threat of the Saddam Hussein regime to Israel, and (c) secure American influence in a country with possibly the second largest oil & gas reserves in the world. To a large extent, it now appears that these objectives can be accomplished. Some milestones in this process: Note: Some of the words in the following section were underlined in the blog. These came from the Wikipedia site, and should be omitted.

. The 2003 invasion was a highly successful military operation, reconfirming the military prowess of American and allied armed forces.

. After the invasion, the US established the Coalition Provisional Authority to govern Iraq. This was widely considered the greatest mistake of this effort.

. A Sunni led insurgency to protest against Shia control instigated widespread sectarian violence and civil disorder. The al-Qaeda took advantage of the insurgency to entrench itself in the country.

. The Coalition Provisional Authority completed the transfer of sovereignty on June 28th, 2004 to the Iraqi Interim Government, formally ending the “occupation.”

. Despite threats of disruption by the insurgents, the elections held on January 30th, 2005 had widespread turnout and created the Iraqi Transitional Government.

. The capture and hanging of Saddam Hussein with most of his closest associates.

. This body drafted the Constitution of Iraq, approved by referendum on October 25th, 2005. Under the new Constitution, elections chose a new Iraqi National Assembly to form the Government of Iraq under Prime Minister Nouri al-Malaki.

. The U.S. “troop surge” advocated by President Bush against contentious US political opposition proved very successful in essentially ousting al-Queda from the country and reducing the levels of sectarian violence.

. The UN mandate of the multinational force in Iraq ended on December 31, 2008.

. Although some Sunni-Shi’ite violence continues, it is at a far reduced level, and the Iraqi security forces are slowly becoming more effective.

Although much progress has been achieved, the cost in terms of lives lost and wounded, (both the Coalition forces and the far greated Iraqi civilian casualties), the financial impact and the damage to our international reputation was far greater than ever anticipated by the Bush Administration and certainly the extent of these costs was never conveyed to the American people. Over the past six years this has become the source of increasing alienation of the public towards the Bush Adminstration, resulting in his disasterous low polling numbers and ultimately the loss of control of Congress and the Presidency to the opposition.

Much has been made of the financial costs of the war, now estimated at about $640 billion. While this is indeed a large sum, several factors should be considered. First, these funds were expended over period of about six years, or roughly $100 billion per year, a fraction of the $12-13 trillion gross national product during those years. While there is no doubt much waste in these expenses, much of the funds were spent within the US economy for arms purchases and personnel, etc. and a large part of the expenditures in Iraq were paid to American contractors. However, rebuilding Iraq’s infrastructure, long neglected under Saddam’s dictatorship, only can be considered beneficial to the extent that it will help create the stable and prosperous country that was the Coalition objective cited above.

Although disussions of the rationale for Operation Iraqi Freedom will continue to stir passions on both sides, they are now mostly irrelevant. The Bush Adminisration is gone, and the opposing party now essentially controls both houses of Congress (witness the passage of the “stimulous” legislation).
The US will remain committed for a long period in Iraq, as military forces are withdrawn and financial transfers reduced. Iraq has moved off center stage, and the far more imporant issues are what changes should be made in US foreign policy in the Middle East and Central and South Asia. Perhaps the most valuable result of the Iraq venture will be the wise application of the lessons learned towards the rest of the region. Perhaps this is asking too much, but in the future ourIraq experience will be referred to in our analysis of foreign policy options in the rest of the region.

For additional background on Iraq and commentary on related topics, visit www,intlfreedom.org.