The continuing blockage of Colombian borders to prevent humanitarian relief supplies from entering Venezuela is further evidence that that Nicolas Maduro has no intention to resign the presidency of Venezuela. Pursuant to the Venezuelan constitution, Juan Guaido became the legitimate president on January 23, 2019 as quickly recognized by the US, Canada, all of the major countries of South America and more than forty others.  The constitution also provided that new elections be held within thirty days but due to Maduro’s refusal to step down, elections have been postponed.  A major public rally is scheduled tomorrow in an attempt to allow foreign aid to enter the country.

The Venezuelan military is still largely controlled by Maduro, and they can and are being deployed to intimidate supporters of the legitimate government of Juan Guaido and to prevent any foreign aid from entering the country. Furthermore, in an unconfirmed report noted by The Economist , the Russians sent 400 mercenaries engaged by a private contractor presumably to protect Maduro from enemies within, a function now performed by Cuban security specialists.

These are all classic moves from the “Dictator’s Playbook” as illustrated in Syria, Turkey and other tyrannies. It has been a successful strategy, as exemplified by the continued rule of Bashar Al-Assad in Syria. After using poison gas in airborne canisters against civilians the Obama administration drew the famous “Red Lines” stating this action would not stand and Al –Assad would be deposed.

At the time, a Syrian commentator remarked that had the US merely positioned one aircraft carrier offshore, the entire Syrian Air Force would have fled to Iran! While we shall never know that this would have occurred, we do know that Bashar Al-Assad regime is still in power after killing some half-million civilians and causing two million refugees to flee to Europe. Nicolas Madoro certainly is working to replicate the Al-Assad survival plan.

Presumably the Pentagon has developed several military scenarios for Venezuela to be implemented when authorized by the Trump administration. As a starting point to hasten the fall of the evil Maduro regime, we suggest that Colombia, Brazil, Argentina and Chile, immediately dispatch appropriate naval vessels ships to operate offshore Venezuela in a “Freedom of the Seas” exercise. Presumably these vessels would have units of their Special Forces aboard to be on call by the Juan Guido government. An Amphibious assault ship such as the USS America (LHA-6) would be an ideal vessel to support this mission. 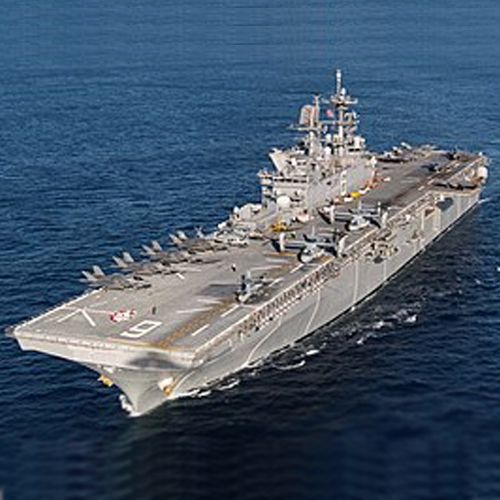 The mere presence of these vessels offshore would give an additional incentive for Venezuelan military personnel to abandon Nicolas Maduro and pledge support to the new Guido government. With the agreement of the participating countries, US forces need not be involved ashore.

No doubt Maduro would still brand any such action as “Gringo Imperialism” but the effectiveness this propaganda would be diminished by the participation of South American military. The operation of any vessel in international waters is often done to confirm freedom of the seas. It is not an act of war, but it would confirm the Allies capability to do so. The longer Maduro remains in power, the more dangerous he becomes, and Juan Guaido is increasingly imperiled. This proposed deployment should be implemented as soon as possible.